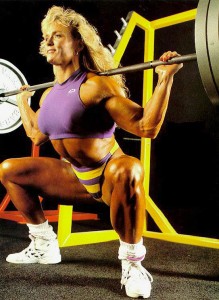 At the example of the Veda rig is quite clear how MuscleStrand objects (in 3dsmax) add realistic movement to the body, allowing to contract calf muscles, bicepses and tricepses. Modifying MuscleStrand it is possible to solve a greater number of tasks while creating rig of athletic body.
In the previous part of this article series, I showed how you can using standard means of 3dsmax modify MuscleStrand while working with SkinWrap and while creating slide effect.

In the process of creating rig of knee it dawned on me that the MuscleStrand lacks one important feature – the possibility of expanding the muscle when it is bent.
In the area of the joint there is multilayer structure of muscles, and while it is bending some muscles are contracting increasing in volume. Stratifying on each other, displacing and contracting muscles give visual effect of extension of adjustment tissue by knee and elbow joints.
It is hardly possibly to create anatomically right muscle structure using MuscleStrand. That’s why I have replaced the whole group of muscles by MuscleStrand object extending it if necessary.

PushByAngle modifier that I wrote, lets you extend any geometric object depending on the angle between two selected objects. At the basis I took 3dsmax’s Push modifier, which pushes out vertices, thereby expanding the object. The amount of expanding is calculated from the value of the angle and the coefficients specified in UI modifier. If you have the wish to use Mesh Select modifier before PushByAngle modifier it is possible to limit pushing out only selected vertices of the object.
PushByAngle interface settings are very similar to Squash/Stretch settings MuscleStrand object. Only unlike Squash/Stretch you give not the measure of extention but angle of bending between selected objects. PushByAngle works with any objects including MuscleStrand in Mesh mode, and is also compatible with modified MuscleStrand as described in the previous part of this article.

Modification of MuscleStrand object, PushByAngle modifier, additional tools (mentioned below) helped me create the rig, which operates Veda in this video. I hope they will be useful for you to create own rigs.  I’ll be glad to get your comments, your remarks and suggestions at work with MuscleStrand objects.

Download the latest version of PushByAngle you can on a separate page in MAXScript category of this site.

Additional tools that I use when working with MuscleStrand objects: