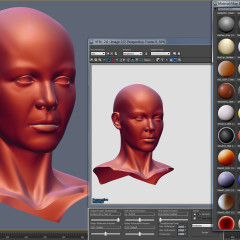 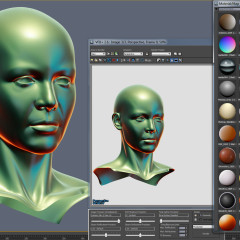 In this article I’d like to go back to the trend of previous years – Lit Spheres materials (also called matcap/Spherical Environment Mapping (SEM), etc.). The essence of this material is that all shader parameters: color, reflections, and so on are located on the image, where the sphere is depicted. To use such a image as material you will need a special shader which can draw out from it the necessary parameters.
This kind of materials are very useful in modeling (especially organic objects) and allow to identify errors in the topology. They have proved themselves in programs such as Mudbox and Zbrush. Presence of the library with such materials and possibility of fast switching between them considerably lighten modeling.
Just creation of Lit Sphere materials and library with them in 3dsmax we’ll do now. In this article we won’t consider creation of pictures with spheres, but we’ll take the ready-made. Our task is to create a material whose properties will be equally visible as when working with a model in the viewport, and in the case where we need to render our model.

For visualization of materials in viewport in 3dsmax and for rendering are responsible different shaders, material created just for rendering is likely to be incorrectly displayed in the viewport, and vice versa.
Before you begin, download and unpack archives with images with the sphere:

So our final material will look the same in the viewport and in render that you can see in the screenshots.

Create hundreds of nearly identical materials manually is tedious task, so I wrote a maxscript (litsphere_lib), which will help us to automate this task. You will need to specify the .FX shader that you want to use, and the folder in which your images with sphere. The script automatically tried all images in a folder and all its sub-folders, and then create the materials on the same principle, which we have reviewed above, then save them in a new library. Using the library you created, you can quickly change the Lit sphere materials on your objects that allow you to identify errors in the object topology.